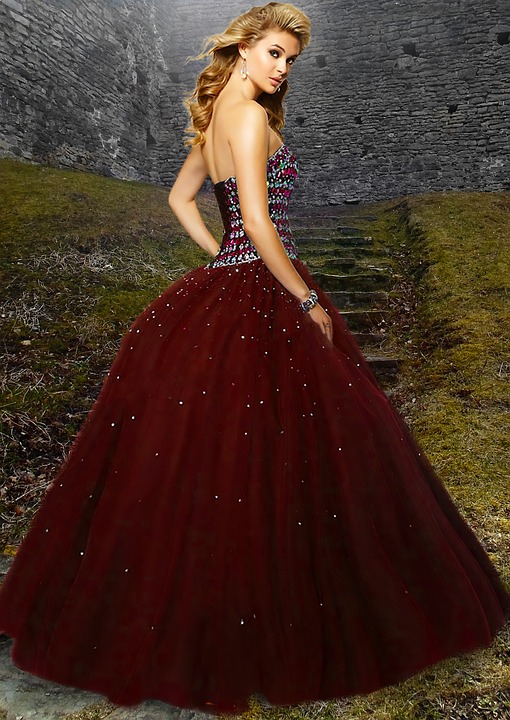 1900 was the ending of a glorious era of Victorian influences and the beginning of the Edwardian social order. But this shift in eras was not distinct-it was rather, a blurring of the boundaries of the two eras.

The Victorian times left behind a hangover of maturity and the concept of elegance especially in styles of ball gowns whereas the Edwardian sensibilities emphasized on free-flowing gowns.

The Influence of Victorians

The ball gowns of 1900 were still exhibiting certain elements of the Victorian age which though had ended with the death of Queen Victoria in 1901. Women by this time were hardly wearing gowns which had crinolines or full bustles but were opting for gowns with cuts by which the hips were accentuated comprised in the soft bustle. But this bustle too gave in to the trendy slim-fitting gowns of the era. These gowns flared a bit towards the lower half of the hip and revealed a skirt with the small train at the bottom.

Changes Witnessed In the Edwardian Era

The Edwardian era was famous for the elaborate, gorgeous and decorative ball gowns that it introduced in the fashion streak of the society. “s- Bend” in the silhouette of the gowns were flowing outward more than they did in the Victorian era. Skirts had an outward curve at the back and fell naturally downward over the knees. The gown on the upper half was designed in a way that it tilted one’s shoulders backward and pushed the bosom towards the front. These gowns had tight sleeves which at the wrist found fullness and tightly enclosed a cuff.

The gowns of the Edwardian era were a treat in themselves. They were the dreamy wonders that most women wore to great occasions of their lives. The materials used in the ball gowns were as per the age, relation and status that the woman had in the society of the era.

Young girls and the married women wore very light dresses though not of silk especially when the dance was an expected activity in the ball. Married women were seen supporting gowns made of a material having partial silk. The single women of the era wore lightest possible materials like muslin, tulle, and lace. White and creamy silk was a more preferred material for wedding gowns. The silk used in the Edwardian era was much softer and flowy in texture.

White and light tinted colors were the most liked option of young women. On certain occasions, they even looked for darker colors depending on complexion and figure. Light colors looked good on slender women while brilliant and dark colors were supported by plump women of the era. The matching of one’s appearance to one’s outfit was appreciated and hence blonde women took towards colors of light blue, pink, white and apple green.

Undergarments comprised of corset, petticoat, chemise, corset cover, and drawers. Chemise was a kind of undershirt usually made of cotton and linen. Corset was meant to give a preferred shape to the body and the cover of the corset was meant to protect one’s gown from strips of metal that enclosed the corset. The petticoat was used to add volume to the one’s gown.

The Silhouette under the Gown

An Ideal Women of the Edwardian era was considered to have a figure with a bust which was full with ample hips and a behind which was full. Under the gowns was the health corset placed to support the weak backs of the women in the 19th century. This corset thrust one’s bust towards the front and hips outward giving rise to an S-shaped, perfect figure according to Edwardian standards.

Extent of Bodice and the Neckline

The necklines of the ball gowns were usually high, especially of the wedding gowns as most weddings were organized during daytime. The ball gowns were decorated using lace, pleating etc. Ruchings were not used as they made the neck appear extremely fat. The bodice of these gowns basically depended on the corset which gave the gown its shape. This also provided the flattened effect to one’s figure and added grace to the gown. Lace was used on neck and the region of the bosom to give the look of necklines which plunged yet retained the modesty of the wearer.

In the initial years of the 19th century, two kinds of sleeves were in fashion. The first type included sleeves that were tight on shoulders and fuller towards wrists, reflecting the S-shaped curves of the dress in its concave appearance. The other style included pagoda sleeves found open-ended and had finished of a sleeve of the blouse. After the early years, the fashion moved toward mutton sleeves which had exaggerated full tops on sleeves till the extent of the elbow. By the end of the decade, kimono sleeves were also been favored by many women as a direct oriental influence.

Shape of the Skirt Favored

Corsets were the rage of the era. No dress or gown was complete without wearing the corset which was the main element that gave shape to the garment. The S-shaped corsets used made the skirt fall in shape of trumpet bell and had a train following.

This was often called the mermaid skirt. But with time the corsets lengthened and the result was that skirts became lesser in volume showing off the feet of the woman wearing it. By the end of the Edwardian period, the corset would plunge till the knee and waistline rise to empire style.

Women were experimenting and trying various styles. They were not only looking for comfort but also freedom of movement. The varying lengths of skirts are examples of this endeavor. Also with the changing sensibilities of the society, the women were becoming bolder and wearing revealing clothes and plunging necklines. The Edwardian era was probably the beginning of the latest fashion industry prevailing in the world.

Final-Clutters is a place for all vibrant dynamic fashion fiestas to know about make-up techniques, fashion tips that make them look the best version of themselves. Get the best advice from popular fashion designers and skin care experts in the industry.

How To Grow Eyebrows Thicker
2

Importance of Skin Facial and Cleansing
3

Why is the Brazilian Hot Wax London Considered a Painless Experience?
2

Why is threading the best hair removal procedure
3